The Girl in the Yellow Pantsuit: Essays on Politics, History, and Culture (Paperback) 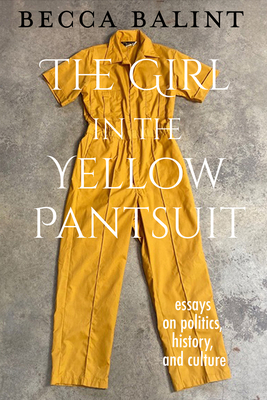 The Girl in the Yellow Pantsuit: Essays on Politics, History, and Culture (Paperback)


Email or call for information on special ordering this title

The Girl in the Yellow Pantsuit collects the best-loved of Becca Balint’s weekly columns on politics, history, and culture. Becca’s curiosity, humor, and deep affection for her subjects provide readers with new ways of examining trenchant problems. Her clear-eyed perspectives on subjects as wide-ranging as American politics, global affairs, education policy, and parenthood challenge us to think more deeply about our own place in the world and the impact we want to leave.
Becca Balint is a stateswoman, current candidate for the U.S. House of Representatives, and President Pro Tempore of the Vermont Senate. After two decades teaching history and civics to middle-schoolers and community college students, Becca won her debut race for state senate in 2014. She has been elected four times despite primary challenges in every race. In 2018, she was elected by the Senate democratic caucus to serve as majority leader, and in 2020, she was unanimously elected by the entire senate to serve as President Pro Tempore. She is an avid outdoorswoman and motorcyclist.
“The Girl in the Yellow Pantsuit by Becca Balint is a collection of sixty-six short essays [that] concern very different topics, They have in common her willingness to expose her own vulnerabilities. . . . The essays often present Balint’s initial hesitation to open herself to others, then describe the connections that arise once she has done so. They offer an impressive array of reflections by a woman who has looked into her imperfect heart and thought deeply. . . . Belief in the power of compassion, trust and positive action govern all Balint’s essays . . . a woman with a wonderfully positive vision and a big, understanding heart.” —Laura Stevenson, Deerfield Valley News