From Staircase to Stage: The Story of Raekwon and the Wu-Tang Clan (Hardcover) 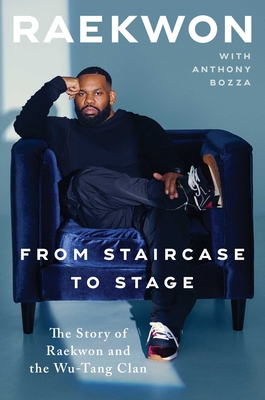 From Staircase to Stage: The Story of Raekwon and the Wu-Tang Clan (Hardcover)

By Raekwon, Anthony Bozza (With)


Will Ship in 1-5 Days from our Distributor
Legendary wordsmith Raekwon the Chef opens up about his journey from the staircases of Park Hill in Staten Island to sold-out stadiums around the world with Wu-Tang Clan in this revealing memoir—perfect for fans of The Autobiography of Gucci Mane and Hustle Harder, Hustle Smarter.

There are rappers who everyone loves and there are rappers who every rapper loves, and Corey Woods, a.k.a. Raekwon the Chef, is one of the few who is both. His versatile flow, natural storytelling, and evocative imagery have inspired legions of fans and a new generation of rappers. Raekwon is one of the founding members of Wu-Tang Clan, and his voice and cadence are synonymous with the sound that has made the group iconic since 1991.

Now, for the first time, Raekwon tells his whole story, from struggling through poverty in order to make ends meet to turning a hobby into a legacy. The Wu-Tang tale is dense, complex, and full of drama, and here nothing is off-limits: the group’s origins, secrets behind songs like “C.R.E.A.M.” and “Protect Ya Neck,” and what it took to be one of the first hip-hop groups to go from the underground to the mainstream. Raekwon also delves deep into the making of his meticulous solo albums—particularly the classic Only Built 4 Cuban Linx—and talks about how spirituality and fatherhood continue to inspire his unstoppable creative process.

A celebration of perseverance and the power of music, From Staircase to Stage is a master storyteller’s lifelong journey to stay true to himself and his roots.
Raekwon the Chef has been one of the most sought-out voices in hip-hop for nearly thirty years. Born as Corey Woods, the Staten Island native is a true originator of lyricism, street culture, and rugged NYC style. As a founding member of Wu-Tang Clan, he achieved success with Enter the Wu-Tang (36 Chambers) in 1993, and followed it up with his platinum solo debut, Only Built 4 Cuban Linx, and countless classic collaborations. He is also an entrepreneur and the founder of his own label, ICE H2O Records, and divides his time between New York, Atlanta, and Texas.

Anthony Bozza is a former Rolling Stone staff writer and author of the New York Times bestsellers Whatever You Say I Am: The Life and Times of Eminem, Tommyland with Tommy Lee, Slash with Slash, and Too Fat to Fish with Artie Lange. He lives in New York City. Visit ABozza.com.
"The Wu-Tang Clan’s most searingly descriptive MC brings the same vivid storytelling power to his first memoir. The Wu saga has been told and retold many times over the years. But even superfans will want to get Raekwon’s often contentious side of the story." —Rolling Stone, "The Best Music Books of 2021"

“The author tells his truth unflinchingly, refusing to gloss over his mistakes or the mistakes of others . . . Raekwon’s raw memoir holds nothing back about his stormy life in Wu-Tang Clan and as one of hip-hop’s most-admired artists.” —Kirkus

“Raekwon's story is one of perseverance, discovery, and vision as he strives to become a better man and outstanding musician.” —Booklist

“Raekwon was a huge influence on me growing up, and his story is for anyone who can appreciate the power of defying expectations.” —Carmelo Anthony, New York Times bestselling author of Where Tomorrows Aren’t Promised and NBA All-Star

“Raekwon debuts with a sincere . . . look at his rise from street hustler to star . . . Fans will relish [his] story of finding success against steep odds.” —Publishers Weekly

“When master rhyme storyteller Raekwon the Chef turns his attention to his own personal odyssey within the rise of his illustrious Clan, expect nothing less than actual facts that offer deep insights into both his complex persona as well as the group dynamics of these rap superheroes. Written with verve and flair, From Staircase to Stage is a welcome addition to the growing Wu Tang canon of literature.” —S.H. Fernando Jr., author of From The Streets of Shaolin: The Wu-Tang Saga

"As we wait to witness the next season of his clan’s American Saga the rapper is stepping up to tell his own story." —Essence.com, “10 Upcoming Music Memoirs We’re Excited About”