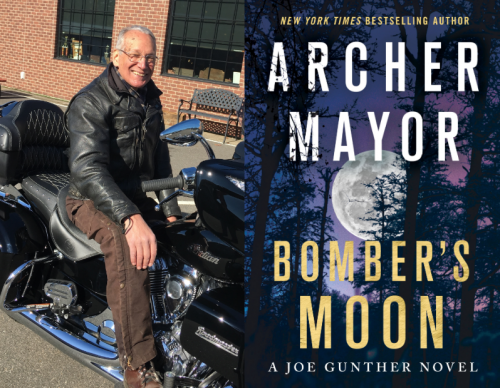 Free and open to the public.

What is a Bomber's Moon? A moon so bright you can spot your enemy by its light.  The catch? They see you, too.

A departure from the usual detective team.

Two strong young women, (one a hardboiled introvert, the other a trusting extrovert) unlikely partners, are both embroiled in the same crime from opposite angles.

Sally—engaging, smart, and last seen in Tag Man—returns as a skilled Private Investigator. Strong minded and well trained, she is placed undercover to peel away the layers hiding questionable activities at a local prep school.

Rachel, an Investigative Reporter (and the Medical Examiner's daughter) now works for the Brattleboro Reformer. She pursues a seductive, creative thief, becoming enmeshed in his intricate, Byzantine activities—suffering the consequences of becoming too close.

Archer Mayor brings in his usual steady team to keep an eye on these two "wild cards," as they all work to find out who did what to whom.

Bomber’s Moon has the gripping twists and turns, murder and mayhem we of course expect from him. This, the THIRTIETH book in the bestselling Joe Gunther mystery series, surpasses its predecessors. A difficult feat. A MUST read.

Archer Mayor is the author of the highly acclaimed Vermont-based series featuring detective Joe Gunther, which the Chicago Tribune describes as “the best police procedurals being written in America.”  He is a past winner of the New England Independent Booksellers Association Award for Best Fiction — the first time a writer of crime literature has been so honored. In 2011, Mayor’s 22nd Joe Gunther novel, TAG MAN, earned a place on The New York Times bestseller list for hardback fiction.

Before turning his hand to fiction, Mayor wrote history books, the most notable of which, Southern Timberman: The Legacy of William Buchanan, concerned the lumber and oil business in Louisiana from the 1870s to the 1970s.  This book was published in 1988 and very well received; it was republished as a trade paperback in 2009.

Archer Mayor is currently a death investigator for Vermont’s Office of the Chief Medical Examiner. Over the past thirty years, he has also been a detective for the Windham County Sheriff’s Office, a volunteer firefighter/EMT, the publisher of his own backlist, and a frequent contributor to magazines and newspapers.