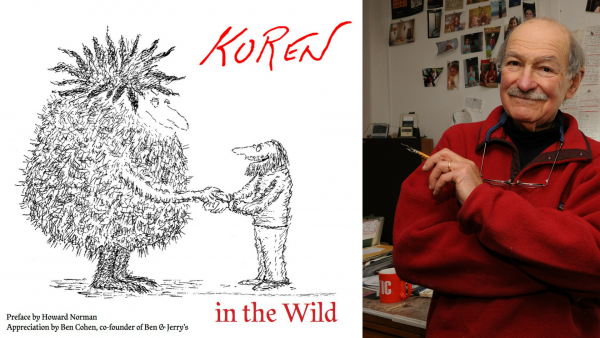 Join New Yorker cartoonist Ed Koren for a signing of "Koren In The Wild," his new collection with a preface by Howard Norman and an appreciation by Ben Cohen, co-founder of Ben & Jerry’s. Koren illustrates country life, exurbanites and the ironies of living in the boonies. His cartoons have Vermonters looking at city folk, and city folk looking at Vermonters.

Koren’s humor, his humanoid, warm and fuzzy, puzzled and brave creatures, will delight the reader, country dweller or not. In this latest collection of cartoons on country life, drawn from his porch in Vermont, nothing is sacred: gas stations, vegetarians, parenting, animals, gourmands, country stores…all are examined with the unique perspective and creativity of this brilliant observer (and artist) of “the wild.”

Free and open to the public.

Edward Koren has long been associated with the The New Yorker magazine, where he has published over 1100 cartoons, as well as numerous covers and illustrations. He has also contributed to many other publications, written and illustrated several books for children, and illustrated many more in various genres. Koren has deep roots in both New York City and Vermont, where he lives with his family and has been a member of the Brookfield Volunteer Fire Dept for 30 years. In 2007, he received The Vermont Governor’s Award for Excellence in the Arts, and served a three-year term as Vermont’s second Cartoonist Laureate (Vermont is the only state in the nation with a Cartoonist Laureate.)

Koren. In the Wild (Paperback)

Koren. in the Wild (Hardcover)