Current reading selections: Death Comes As the End by Agatha Christie and Crocodile on the Sandbank by Elizabeth Peters. 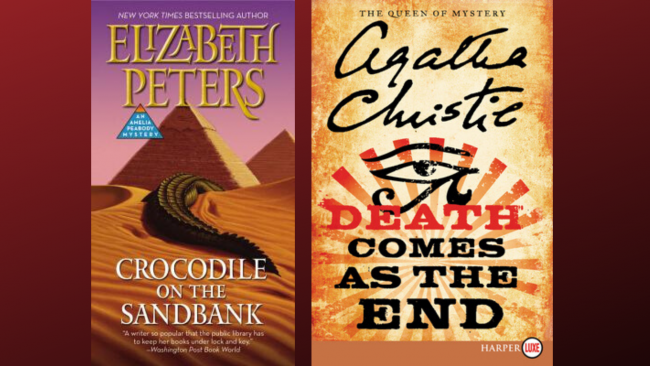 Death Comes As the End :

In Death Comes As the End, Dame Agatha Christie transports us back to ancient Egypt 2000 B.C. where a priest’s daughter, investigating a suspicious death, uncovers an asp’s nest of jealousy, betrayal, and serial murder.

It is Egypt in 2000 BC, where death gives meaning to life. At the foot of a cliff lies the broken, twisted body of Nofret, concubine to a ka-priest. Young, beautiful, and venomous, most agree that it was fate—she deserved to die like a snake!

But at her father's house on the banks of the Nile, the priest's daughter Renisenb believes that the woman's death is suspicious. Increasingly, she becomes convinced that the source of evil lurks within their household—and watches helplessly as the family's passions explode in murder. . . .

Crocodile on the Sandbank:

"If Indiana Jones were female, a wife, and a mother who lived in Victorian times, he would be Amelia Peabody Emerson."--Publishers Weekly

Amelia Peabody, that indomitable product of the Victorian age, embarks on her debut Egyptian adventure armed with unshakable self-confidence, a journal to record her thoughts, and, of course, a sturdy umbrella. On her way to Cairo, Amelia rescues young Evelyn Barton-Forbes, who has been abandoned by her scoundrel lover. Together the two women sail up the Nile to an archeological site run by the Emerson brothers-the irascible but dashing Radcliffe and the amiable Walter. Soon their little party is increased by one-one mummy that is, and a singularly lively example of the species.

Strange visitations, suspicious accidents, and a botched kidnapping convince Amelia that there is a plot afoot to harm Evelyn. Now Amelia finds herself up against an unknown enemy-and perilous forces that threaten to make her first Egyptian trip also her last . . .

Death Comes as the End (Paperback)