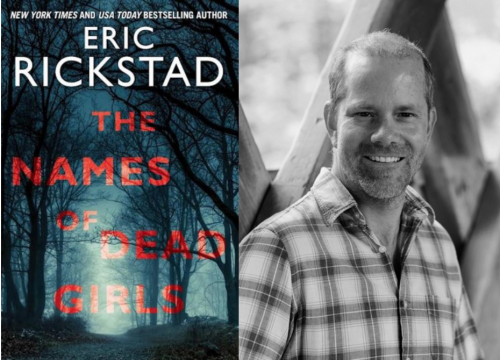 Join New York Times bestsellng author Eric Rickstad at George's Mystery Book Club for a reading and discussion on his newest novel, The Names of Dead Girls, the terrifying sequel to the smash sensation The Silent Girls.

Q&A, book signing, and refreshments. Free and open to the public.

Called "A commanding, disturbing and beautiful masterpiece" and "The quintessence of the Gothic," The Names of Dead Girls is the latest in Rickstad's Canaan Crime Series.

In a remote northern Vermont town, college student Rachel Rath is being watched. She can feel the stranger’s eyes on her, relentless and possessive. And she’s sure the man watching her is the same man who killed her mother and father years ago: Ned Preacher, a serial rapist and murderer who gamed the system to get a light sentence. Now, he’s free.

Detective Frank Rath adopted Rachel, his niece, after the shocking murder of her parents when she was a baby. Ever since, Rath’s tried to protect her from the true story of her parents’ deaths. But now Preacher is calling Rath. He’s threatening Rachel and plotting cruelties for her, of the flesh and of the mind. When other girls are found brutally murdered, and a woman goes missing, Rath must untangle the threads that tie these new crimes and long-ago nightmares together. Soon he'll learn that the truth is more perverse than anyone could guess, rife with secrets, cruel desires, and warped, deadly loyalty.

Mesmerizing, startling, and intricately plotted, The Names of Dead Girls builds relentlessly on its spellbinding premise, luring readers into its dark and macabre mystery, right to its shocking end.

“You’re in the hands of one of the best in the business, at the very peak of his form. “ (Michael Harvey, author of Brighton)

Eric Rickstad is the New York Times, USA Today, and international bestselling author of The Names of Dead Girls, The Silent Girls, Lie in Wait, and Reap, novels heralded as dark, disturbing, and masterful. He lives in Vermont with his family.