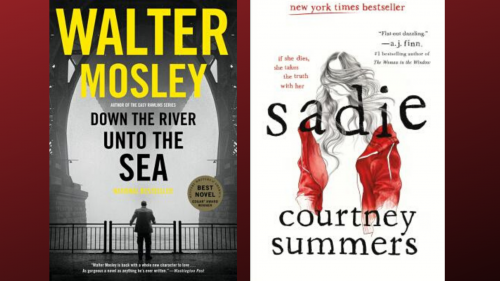 Current reading selections: Down the River unto the Sea by Walter Mosley and Sadie by Courtney Summers.

Down the River unto the Sea

Joe King Oliver was one of the NYPD's finest investigators, until, dispatched to arrest a well-heeled car thief, he is framed for assault by his enemies within the NYPD, a charge which lands him in solitary at Rikers Island.

A decade later, King is a private detective, running his agency with the help of his teenage daughter, Aja-Denise. Broken by the brutality he suffered and committed in equal measure while behind bars, his work and his daughter are the only light in his solitary life. When he receives a card in the mail from the woman who admits she was paid to frame him those years ago, King realizes that he has no choice but to take his own case: figuring out who on the force wanted him disposed of--and why.

Running in parallel with King's own quest for justice is the case of a Black radical journalist accused of killing two on-duty police officers who had been abusing their badges to traffic in drugs and women within the city's poorest neighborhoods.

Joined by Melquarth Frost, a brilliant sociopath, our hero must beat dirty cops and dirtier bankers, craven lawyers, and above all keep his daughter far from the underworld in which he works. All the while, two lives hang in the balance: King's client's, and King's own.

"Sadie: a novel for readers of any age, and a character as indelible as a scar. Flat-out dazzling." —A. J. Finn, #1 New York Times bestselling author of The Woman in the Window

"Sadie is an electrifying, high-stakes road trip. Clear your schedule. You're not going anywhere until you've reached the end." —Stephanie Perkins, New York Times bestselling author of There's Someone Inside Your House and Anna and the French Kiss

A missing girl on a journey of revenge. A Serial—like podcast following the clues she's left behind. And an ending you won't be able to stop talking about.

Sadie hasn't had an easy life. Growing up on her own, she's been raising her sister Mattie in an isolated small town, trying her best to provide a normal life and keep their heads above water.

But when Mattie is found dead, Sadie's entire world crumbles. After a somewhat botched police investigation, Sadie is determined to bring her sister's killer to justice and hits the road following a few meager clues to find him.

When West McCray—a radio personality working on a segment about small, forgotten towns in America—overhears Sadie's story at a local gas station, he becomes obsessed with finding the missing girl. He starts his own podcast as he tracks Sadie's journey, trying to figure out what happened, hoping to find her before it's too late.

Courtney Summers has written the breakout book of her career. Sadie is propulsive and harrowing and will keep you riveted until the last page.

Down the River unto the Sea (Paperback)