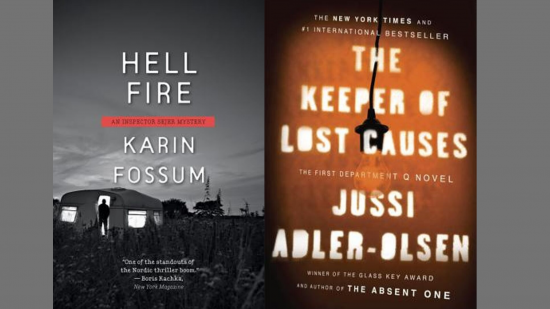 “A truly great writer and explorer of the human mind.” — Jo Nesbø

“What grips readers is the enormous amount of emotion [Fossum] works up as we get closer and closer to reliving the murderous event in question . . . Hell Fire is close to heartbreaking, and there are not many novels, thrillers or otherwise, you can say that about.” — Los Angeles Times

A gruesome tableau awaits Inspector Konrad Sejer in the oppressive summer heat: a woman and a young boy lay dead in a pool of blood near a dank trailer. The motivation behind the deaths of Bonnie Hayden and her five-year-old son, Simon, is mysterious—there is no sign of robbery. Who would brutally stab a defenseless woman and her child? In a parallel story, another mother, Mass Malthe, navigates life with her adult son, Eddie. It’s a relationship some would call too close, since Eddie’s father, a man he obsesses over, abandoned them many years ago. As Sejer searches for the truth behind the seemingly senseless killings, Hell Firedeftly probes why we lie to those closest to us, and what drives people to commit the most horrific of crimes.

The Keeper of Lost Causes: The First Department Q Novel

Get to know the detective in charge of Copenhagen's coldest cases in the first electrifying Department Q mystery from New York Times bestselling author Jussi Adler-Olsen.

Carl Mørck used to be one of Denmark’s best homicide detectives. Then a hail of bullets destroyed the lives of two fellow cops, and Carl—who didn’t draw his weapon—blames himself. So a promotion is the last thing he expects. But Department Q is a department of one, and Carl’s got only a stack of cold cases for company. His colleagues snicker, but Carl may have the last laugh, because one file keeps nagging at him: a liberal politician vanished five years earlier and is presumed dead. But she isn’t dead...yet.