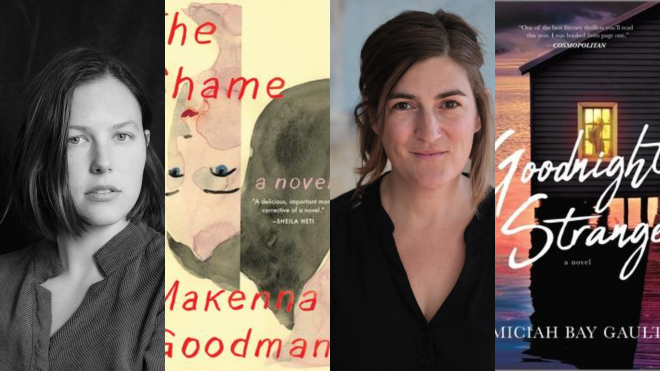 Join Vermont authors Makenna Goodman and Miciah Bay Gault in virtual conversation, with a reading from Goodman's debut novel The Shame. Gault's novel Goodnight Stranger debuted in July 2019 and is new in paperback!

A fable both blistering and surreal, The Shame is a propulsive, funny, and thought-provoking debut about a woman in isolation, whose mind—fueled by capitalism, motherhood, and the search for meaningful art—attempts to betray her. “A delicious, important moral corrective of a novel.” —SHEILA HETI

A compulsive debut of literary suspense, Goodnight Stranger follows one young woman caught between her desire for the future and the tragedy of her past, and the love she has for her brother and the stranger who drives them apart. "One of the best literary thrillers you'll read this year, I was hooked from page one." -- Cosmopolitan

Makenna Goodman is based in Vermont. The Shame is her first novel, and has been featured on several best of lists over the past few months including Bustle, Literary Hub, Book Riot, and BuzzFeed, and excerpts and interviews have been featured in Electric Literature, Guernica, Lit Hub, Seven Days, VPR, the Adroit Journal, and forthcoming in the Paris Review. The Boston Globe says her "sentences pulse, they are alive". Booklist called The Shame "an engrossing page-turner... equal parts psychological case study and searing commentary of parenting and capitalism". BookRiot called it “a haunting, unsettling story of motherhood, marriage, capitalism, making a life (and a living), and the nature of relationships.” The writer Sheila Heti says it is "an important moral corrective of a novel," and it has received advance praise from writers including Jenny Offill, Susan Minot, Helen Phillips, and more.

Miciah Bay Gault grew up on Sanibel Island, Cape Cod, and other places by the sea. A graduate of the Syracuse MFA program, she now teaches in the MFA in Writing & Publishing program at Vermont College of Fine Arts, coordinates the Vermont Book Award, and offers mentoring, editing, and coaching services through Word House. Goodnight Stranger, her first book, is on the long list for the Center for Fiction's First Novel Prize and was a finalist in the 2019 Shirley Jackson Awards. She lives in Montpelier, Vermont, with her husband and three children.