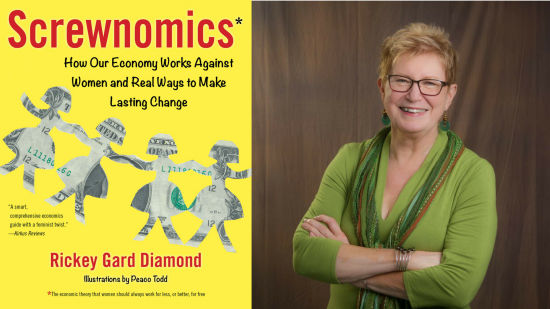 Change the Story with Screwnomics: A Book Launch Event to Learn How the Economy Works Against Women and Real Ways to Make Lasting Change

A book launch celebration and discussion on the state of women's economics with author Rickey Gard Diamond and Vermont Commission on Women Director Cary Brown. Free and open to the public.

Diamond and Brown will talk about Screwnomics, Diamond’s new book about the unspoken but widely applied economic theory that women should always work for less, or better, for free. Diamond will share stories along with surprising definitions and cartoons to help you laugh at what is often absurd.

Diamond and Brown will share real ways that Vermont women are already making change —and you are invited to take part in that change. Brown will share hard-to-find economic data on women, and give a brief legislative update. You’ll learn tools to support each other, ways to move beyond labels to find your economic story, and why making this subject as personal as it is will really make a difference.

“Why is it hard to find economic data on Vermont women? Because when money talks, it talks in a male voice. But we can and already are changing the story,” says author Rickey Gard Diamond. She invites you to be part of the action at her Montpelier book launch on Tuesday, May 1st at 7:00 p.m. at Bear Pond Books.

Screwnomics: How the Economy Works Against Women and Real Ways to Make Lasting Change
In the past 50 years, the U.S. has seen a major shift in economic theory, yet few women can identify or talk about its influence. Screwnomics issues a wake-up call for today's women to join what has been a nearly exclusively male conversation for the past 2500 years. It explains the sexual history of economics, and the unspoken but widely applied economic theory that females, including our mother earth, should always work for less, or better, for free. Written "for those who only keep the whole show going, making sure everyone eats and has clean socks," Screwnomics offers readers hope for a better, more inclusive future—and the tools to make that hope a reality.

“A smart, comprehensive economics guide with a feminist twist… her experience as a novelist, journalist, and professor are all brought to bear to demystify difficult concepts… Diamond’s wit and charm, combined with Todd’s quirky art, succeed in creating an economic primer that’s both informative and fun”
— Kirkus Reviews

“A timely critique, and a needed story. Masculinity’s measure by money is not only ludicrous, it’s getting downright dangerous.”
—Nomi Prins, former managing director at Goldman Sachs, and author of All the Presidents’ Bankers: The Hidden Alliances that Drive American Power and It Takes A Pillage: An Epic Tale of Power, Deceit, and Untold Trillions.

A journalist and fiction writer, Rickey Gard Diamond has long focused on money, politics, and cultural change. Writing about people in poverty and government policy, she became founding editor of Vermont Woman in 1985, where she continues today as a contributing editor. While publishing articles and short fiction, she taught writing and literature, feminist and media studies at Vermont College of Norwich University for over 20 years. In 1999, Calyx Books published her novel, Second Sight, which was reissued by HarperCollins in 2000. In 2011 she was awarded a National Newspaper Association award for her article series, “An Economy of Our Own,” and in 2014 she won a Hedgebrook fellowship for her work on Screwnomics. Meanwhile, her short fiction, published in literary journals, was issued as a collection, Whole Worlds Could Pass Away (Rootstock Publishing, 2017). A mother and grandmother, she lives in Montpelier with her husband and their beautiful cat. She’s still organizing, blogging, and connecting with EconoGirlfriends around the world.

About the guest speaker

Cary Brown served two terms as a VCW commissioner before joining the staff in 2012.  She has worked as the Director of Girls’ Programs for Vermont Works for Women, a non-profit organization supporting education, training and careers in non-traditional fields for women and girls, and directed the Women in Technology Project, a national award–winning summer technology camp for girls at Vermont Technical College.  She has served on the boards of Northern New England Tradeswomen, Turtle Island Children's Center, the New England Association for Cooperative Education and Field Experience, and the Norwich University Alumni Association.  Cary received her bachelor’s degree from Haverford College, and a Masters of Public Administration degree from Norwich University. She lives in Montpelier with her family, where she is a Justice of the Peace.

Screwnomics: How Our Economy Works Against Women and Real Ways to Make Lasting Change (Paperback)