Veruca is a male Russian Tortoise who lives inside Bear Pond Books in Montpelier, Vermont! When Veruca is not hibernating (we have long winters) he is posing for his fans on Instagram. Click to follow @VerucatheBookstoreTortoise. Veruca celebrates his birthday every April, and is about a quarter of a century old! Stop by the Children's Room today and say hello. You might catch him munching on his favorite foods: shredded carrots, lettuce, or, in the spring, fresh dandelions. 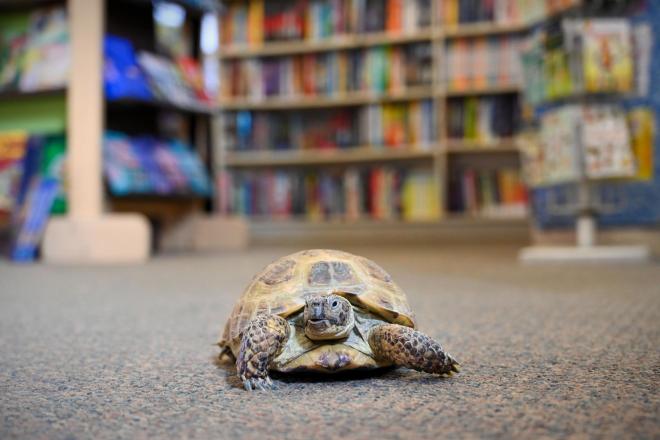 Q: Is Veruca a turtle?

A. Veruca is a tortoise. One important distinction between the two is, tortoises live only on land and turtles live on land and in water.

Q: How old is Veruca?

A: We don't actually know but we're guessing he's at least 25 to 30 years old. Russian Tortoises can live 50 or more years.

Q: Is Veruca a male or female?

A: When we first got him (he lived at Rivendell Books before moving to Bear Pond) we thought he was a girl, which is why we named him Veruca after Veruca Salt in Charlie and the Chocolate Factory. Later, we learned he is actually male.

Q: Does Veruca hibernate? Does he go outside?

A: Veruca hibernates by burrowing into his hay to enjoy the dark. Some winters he hibernates for months, some not at all. He rarely goes outside but when he does, it's only in the summer. He does enjoy walks around the Children's Room for exercise now and then.

Q: What does Veruca eat and drink?

A: Veruca is a vegetarian and enjoys vegetables such as carrots, lettuce, and dandelions. As a desert animal (originally), he does not drink water; instead he gets water from his food and by having a nice soak in the tub (no bubbles!).

A: Veruca pretends to scorn social media, but we think he secretly enjoys being a celebrity. With that face, who wouldn't?

A: Of course! Scroll down to see some of his favorite tortoise-inspired stories.

Tracking Tortoises: The Mission to Save a Galápagos Giant (Library Binding)

Memoirs of a Tortoise (Hardcover)

Rodney Was a Tortoise (Hardcover)

Turtle and Tortoise Are Not Friends (Hardcover)

The Foolish Tortoise (The World of Eric Carle) (Board book)

Life in the Slow Lane: A Desert Tortoise Tale (Paperback)