A Wanted Man (with bonus short story Not a Drill): A Jack Reacher Novel (Paperback) 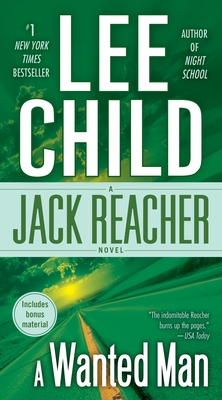 A Wanted Man (with bonus short story Not a Drill): A Jack Reacher Novel (Paperback)

This is book number 17 in the Jack Reacher series.

“The indomitable Reacher burns up the pages.”—USA Today

Four people in a car, hoping to make Chicago by morning. One man driving, another telling stories that don’t add up. A woman in the back, silent and worried. And a hitchhiker with a broken nose. An hour behind them, the FBI descends on an old pumping station where a man was stabbed to death—the knife work professional, the killers nowhere to be seen.

All Jack Reacher wanted was a ride to Virginia. All he did was stick out his thumb. But he soon discovers he has hitched more than a ride. He has tied himself to a massive conspiracy, in which nothing is what it seems, and nobody is telling the truth.

“Smart, breathless . . . [with] one of the best female characters in the whole Reacher series.”—The New York Times

“Subtle and nuanced [with] seductive writing and irresistible plot twists.”—Newsweek
Lee Child is the author of more than two dozen New York Times bestselling Jack Reacher thrillers, with most having reached the #1 position, and the #1 bestselling complete Jack Reacher story collection, No Middle Name. Foreign rights in the Reacher series have sold in one hundred territories. A native of England and a former television director, Lee Child lives in New York City and Wyoming.
Praise for the Jack Reacher series

“The truth about Reacher gets better and better. . . . This series [is] utterly addictive.”—Janet Maslin, The New York Times

“Reacher is the stuff of myth. . . . One of this century’s most original, tantalizing pop-fiction heroes.”—The Washington Post

“Reacher is a man for whom the phrase moral compass was invented: His code determines his direction. . . . You need Jack Reacher.”—The Atlantic

“I pick up Jack Reacher when I’m in the mood for someone big to solve my problems.”—Patricia Cornwell

“[A] feverishly thrilling series . . . You can always count on furious action.”—Miami Herald