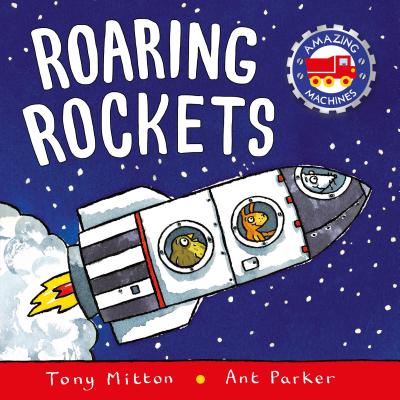 Rockets have power. They rise and roar. This rocket's waiting, ready to soar. Rockets carry astronauts with cool, white suits oxygen helmets and gravity boots. Blast off with more out-of-this-world couplets! This time it is machines that fly. In bright and bold illustrations that are as witty as the text, the animal crew roars and whizzes into outer space.

TONY MITTON was born in Tripoli, North Africa, and grew up in Africa, Germany, Hong Kong, and England. He divides his time between teaching and writing children's books. He lives in Cambridge, England.

Ant Parker studied drawing and printing at the Bath Academy of Art in England and has taught papermaking, printing and bookbinding workshops for children. Toddlers and parents around the globe have discovered the irresistible appeal of his wacky cartoon characters in Flashing Fire Engines, Terrific Trains, Dazzling Diggers, and Roaring Rockets. Other titles include Charlie the Chicken and Desmond the Dog.
“Informational books don't have to be boring, and this book is a good example of one that is well done...Children will delight in the word play as they join a trio of wacky animals as they blast off into space.” —Children's Literature