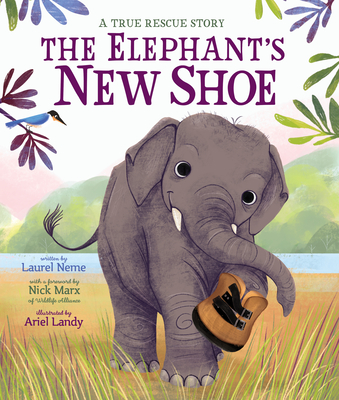 This sweet true story stars a tiny, orphaned elephant who was given another chance.
When Chhouk, an Asian elephant calf, was found, he was alone, underweight, and had a severe foot injury. Conservationist Nick Marx of Wildlife Alliance rescued the baby elephant. With help from the Cambodian Forestry Administration, the Cambodian School of Prosthetics and Orthotics, and an elephant named Lucky, Nick nursed Chhouk back to health and made him an artificial foot. One of the first animals to ever be fitted with a prosthetic, Chhouk helped pioneer the technology -- and most importantly, was able to walk again!

This true animal rescue story will satisfy animal lovers and capture the hearts of both young readers and their parents.

As a young girl, Laurel Neme dreamed of helping animals. At first, she wanted to be a large animal veterinarian and talk to the animals like Dr. Dolittle. Later, she wanted to be an animal scientist like Jane Goodall, and filled notebooks with observations about her goldfish. Eventually, she decided to help animals in her own way -- by telling their stories through books and news articles for National Geographic and others. She lives in Vermont with her husband, son, and supersmart German shepherd, who is learning to do the laundry. To learn more, visit LaurelNeme.com.

Ariel Landy has been illustrating her whole life, starting with crayon portraits of her cats, dogs, and hamsters. While she may never have an elephant of her own, the honor of illustrating Chhouk was close enough. A Massachusetts native and former New Yorker, she currently lives in France with her husband and their rescue dog, where she can draw animals in her backyard to her heart’s content.

Praise for The Elephant's New Shoe: