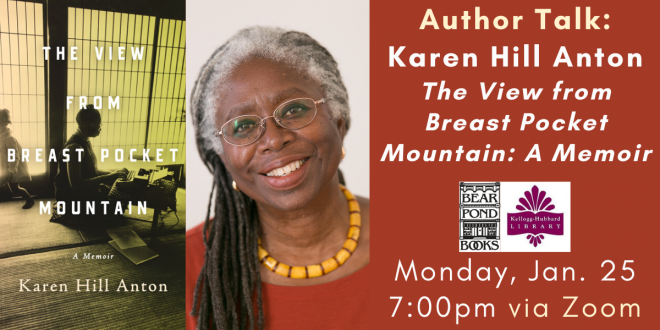 Karen Hill Anton, author of The View From Breast Pocket Mountain, joins us via Zoom from Japan to discuss her memoir of her time spent between New York, Vermont, Turkey, Iran, Afghanistan and Japan. With Tamar Cole, writer and writing coach. Free and open to the public, co-hosted with the Kellogg-Hubbard Library. Registration is required for the Zoom link.

About the author:
Karen Hill Anton, formerly a columnist for The Japan Times and the Japanese newspaper Chunichi Shimbun, is a cross-cultural competence consultant and coach. She lectures widely on her experience of cross-cultural adaptation and raising four bilingual, bicultural children. Originally from New York City, she’s achieved second-degree mastery in Japanese calligraphy and has lived with her husband William Anton in rural Japan since 1975.

As a motherless teenager raised by a caring albeit strict father, we see Anton's developing awareness of the world beyond the boundaries of her New York City neighborhood before she goes on to live in a castle in 1960s Denmark and a cabin in 1970s Vermont. With a burning curiosity and vision of a life as yet unformed, she travels overland to Turkey, Iran, Afghanistan, and finally to the place she'll come to call home, Japan.

This memoir is filled with unexpected encounters with the very famous and those unknown and unnamed. On a journey through marriage and motherhood, love, laughter, tragedy and hope, we follow along as Anton makes her way through a life unplanned but well lived. The View from Breast Pocket Mountain is a story for our time, reminding the reader of our interconnectedness, our shared humanity.