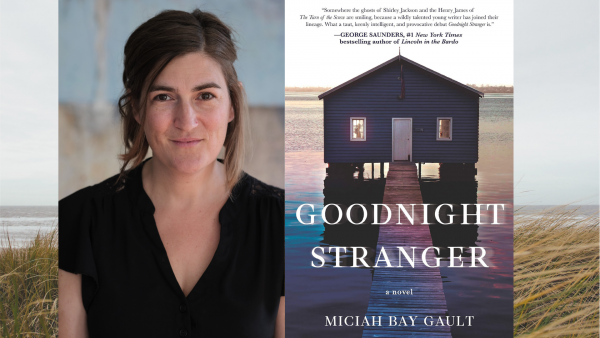 Join us to celebrate the launch of local author Miciah Bay Gault's debut novel, "Goodnight Stranger," which Cosmopolitan calls "one of the best literary thrillers you’ll read this year." Also named one of BookRiot's 50 Must-Read Crime Titles and one of BBC Culture's 10 Smartest Beach Reads!

With cake, wine & refreshments, reading & book signing. Free and open to the public!

"Somewhere the ghosts of Shirley Jackson and the Henry James of The Turn of the Screw are smiling, because a wildly talented young writer has joined their lineage. What a taut, keenly intelligent, and provocative debut Goodnight Stranger is. Deeply compelling and enjoyable, suffused with a genuinely thrilling new mode of literary energy." —George Saunders, #1 New York Times Bestselling author of Lincoln in the Bardo

A compulsive debut of literary suspense, Goodnight Stranger follows one young woman held captive by her past and the stranger whose arrival unearths long-buried family secrets.

Lydia and Lucas Moore are in their late twenties when a stranger enters their small world on Wolf Island. Lydia, the responsible sister, has cared for her pathologically shy brother, Lucas, ever since their mom's death a decade before. They live together, comfortable yet confined, in their family house by the sea, shadowed by events from their childhood.

When Lydia sees the stranger step off the ferry, she feels an immediate connection to him. Lucas is convinced the man, Cole Anthony, is the reincarnation of their baby brother, who died when they were young. Cole knows their mannerisms, their home, the topography of the island--what else could that mean? Though Lydia is doubtful, she can't deny she is drawn to his magnetism, his energy, and his warmth.

To discover the truth about Cole, Lydia must finally face her anxiety about leaving the island and summon the strength to challenge Cole's grip on her family's past and her brother. A deliciously alluring read, Goodnight Stranger is a story of choices and regrets, courage and loneliness, and the ways we hold on to those we love.

Miciah Bay Gault grew up on Sanibel Island, Cape Cod, and other places by the sea. A graduate of the Syracuse MFA program, she now teaches in the MFA in Writing & Publishing program at Vermont College of Fine Arts and is the coordinator of the Vermont Book Award. Her fiction and essays have appeared in Tin House, The Sun, The Southern Review, Agni, The Literary Review, and the anthology Contemporary Vermont Fiction (Green Writers Press, 2014). She's the recipient of a Vermont Arts Council Creation Grant. Miciah was the editor of the literary journal Hunger Mountain for 9 years. She lives in Montpelier, VT with her husband and three children.