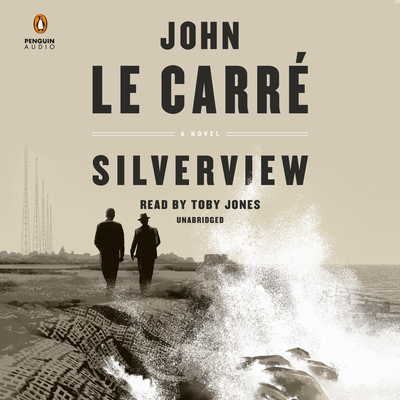 In his last completed novel, John le Carré turns his focus to the world that occupied his writing for the past sixty years—the secret world itself.

Named a most anticipated book of the fall by the Associated Press, TIME, People, Entertainment Weekly, Washington Post, AARP, The Millions, Lit Hub, Thrillist, and more

Julian Lawndsley has renounced his high-flying job in the city for a simpler life running a bookshop in a small English seaside town. But only a couple of months into his new career, Julian’s evening is disrupted by a visitor. Edward, a Polish émigré living in Silverview, the big house on the edge of town, seems to know a lot about Julian’s family and is rather too interested in the inner workings of his modest new enterprise.

When a letter turns up at the door of a spy chief in London warning him of a dangerous leak, the investigations lead him to this quiet town by the sea . . .

Silverview is the mesmerizing story of an encounter between innocence and experience and between public duty and private morals. In his inimitable voice John le Carré, the greatest chronicler of our age, seeks to answer the question of what we truly owe to the people we love.

John le Carré was born in 1931. For six decades, he wrote novels that came to define our age. The son of a con man, he spent his childhood between boarding school and the London underworld. At sixteen he found refuge at the university of Bern, then later at Oxford. A spell of teaching at Eton led him to a short career in British Intelligence (in MI5 and then MI6). He published his debut novel, Call for the Dead, in 1961 while still a secret servant. His third novel, The Spy Who Came in from the Cold, secured him a worldwide reputation, which was consolidated by the acclaim for his trilogy Tinker Tailor Soldier Spy, The Honourable Schoolboy, and Smiley’s People. At the end of the Cold War, le Carré widened his scope to explore an international landscape including the arms trade and the War on Terror. His memoir, The Pigeon Tunnel, was published in 2016 and the last George Smiley novel, A Legacy of Spies, appeared in 2017. He died on December 12, 2020.

“A fitting requiem for the career of the man who brought a new level of complexity and humanity to espionage fiction.”
—Booklist, starred review

“[In Silverview,] le Carré plays out revelations about [the characters] slowly and teasingly, and, in the end, they’re as damning as you could wish. The real drama, however, is in the present, where all the characters are hopelessly intertwined and compromised by their loves and loyalties, none of them innocent. . . . The author’s last few novels have been increasingly valedictory, but this one is truly haunted by intimations of mortality.”
—Kirkus Reviews, starred review

“First-rate prose and a fascinating plot distinguish the final novel from MWA Grand Master le Carré ... This is a fitting coda to a remarkable career.”
—Publishers Weekly

“[S]uperb. . . . Fraught as it is with reflections on death and dying, Silverview is tinged with an autumnal sense of loss and the self-examination of an old man looking back on his extraordinary career. John le Carré, one of the great analysts of the contemporary scene, has left us a minor masterpiece of secrets and lies in spy land.”
—Evening Standard (UK)

“[Silverview] is a wonderful posthumous gift to his readers. . . . There will never be another John le Carré.”
—Toronto Guardian