Live Online with Bill Mares & Kim Greenwood, co-authors of "The Land of Milk & Honey: a history of beekeeping in Vermont" 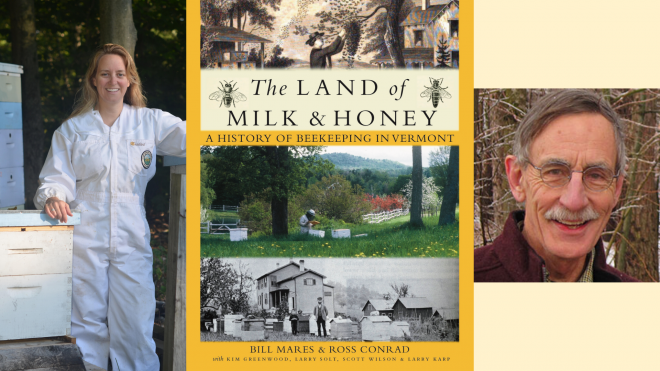 Six Vermont beekeepers, led by established authors Bill Mares and Ross Conrad, have gathered up the geniuses and oddballs, inventors and saints of the more than 250 years of Vermont's beekeeping history. This book is a must read for anyone interested in how bees and beekeeping got to where they are today in Vermont and the US. The Land of Milk and Honey provides a powerful testament of the state’s oversized leadership to protect our nation’s pollinators and challenges other states to write their own beekeeping histories.

The Land of Milk and Honey follows the trials and tribulations of notable and anonymous beekeepers in Vermont from the early 1800s through the next 200 years. The history includes such beekeeping highlights as the “Vermont Beehive,” patented in 1836 by John Moseley Weeks of Salisbury, as Vermont's most prominent entry in a worldwide search to modernize traditional hives. Other Vermont beekeeper-inventors were Augustin Manum and his “Bristol Chaff Hive” and James Crane of Bridport, who pioneered the use of cardboard cases for the packing of honey comb. Charles Mraz of Middlebury who bought out the Crane business, became world famous for his invention of the fume board and his passionate advocacy for apitherapy.

This study provides a microcosm of Americans' relationship with bees, the "farming for intellectuals" in Sue Hubbell's lively phrase. Land of Milk and Honey explores the relationship between the people of Vermont and the countryside they inhabit: a land and people that shift and change through the centuries in ways that directly affect the health and well-being of bees and its beekeepers.  One region of Vermont, Addison County, consistently has been the epicenter of Vermont beekeeping as it exemplified the matrix between bees, forage, fruits and herbivores to become a veritable "land of milk and honey."  It continues to produce roughly half of all Vermont's honey.

To give a broader flavor to the book, its authors come from different parts of the state. Two of them are from ground zero of beekeeping in Vermont, Addison County. Together the authors average 25-years experience in beekeeping, and all teach the craft of beekeeping formally and informally.

Bill Mares has been a backyard beekeeper for over forty-five years. Raised in Texas, educated at Harvard, Mares is a former journalist, state representative and high school teacher. Mares has authored or co-authored seventeen books on a range of topics, including “Bees Besieged.” He been president of the Vermont Beekeepers Association and the Eastern Apicultural Association. He received the Devillbiss Award for from EAS in 2012, and was named Vermont Beekeeper of the Year in 2013. He lives in Burlington with his wife of forty-eight years, Chris Hadsel.

Kim Greenwood worked at the Vermont Natural Resources Council, most recently as Water Program Director. She is an engineer with experience at Husky Injection Molding and Scitest Laboratories. Greenwood has served on numerous boards and commissions, including the Vermont River Conservancy, Vermont Beekeepers Association and the Town of Duxbury cemetery and planning commissions. Kim lives in Duxbury with her husband Ian Ormon, where they run Camel’s Hump Honey. She was recently appointed deputy commissioner of the Department of Environmental Conservation (DEC).

***This online programming is made possible thanks to the generosity of our community. Please consider contributing to the NBNC Resiliency Fund today***